In Memory of Niall Mackay 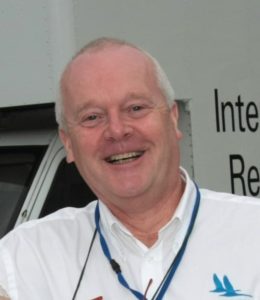 Following the announcement of the sad passing of Niall on the 22nd August 2017,  his  funeral took place at Cublington, near Aylesbury on 30th August 2017.  It was attended by his family and many of his friends from the moving industry in the UK and around the world, who joined together to pay their respects to Niall and his family, plus celebrate and remember his life, both personal and in business.

Niall, who worked at Gerson for some 34 years, started his career in the moving industry with Giltspur Bullen’s in 1975 where he became Operations Manager.  In 1980, he left them to join Amertrans, also as Operations Manager where he remained until 1982. It was in 1983, Niall joined Michael Gerson Ltd as an Account Manager at the head office in Whetstone and subsequently took-up the vacant position of General Manager of the Daventry based operation in 1995. In 2002 he was part of the management team that acquired the business from the Gerson family and from that time he remained as Managing Director of the company.

Niall will be remembered fondly as an ambassador for the company and our industry, plus as a gentleman with great integrity.

Gerson Relocation thank everyone for all the kind messages of condolence from friends and colleagues from around the world. All of these have been passed-on to Niall’s wife Jenny and she has asked that the following message of thanks be  passed-on:

“Please pass on my thanks to all who attended and sent cards and good wishes to me. There were so many that I won’t be able to thank each one individually, but I would like all to know how much it meant to me that so much effort was made by so many and how comforted I am to know how well loved and respected Niall was.”

How to Move to the USA from the UK: Your Essential Guide

Gerson Relocation BV are pleased to announce the appointment of Marco Bongers as Operational Director. …