How does Apple’s Measure App measure up for pre-move surveys?

Is Apple’s Measure any use for when it comes to moving home?

Apple has launched iOS 12.0 and one feature in particular sent the internet into overload as people started to measure almost everything – including their pets.  We asked two of our in-house moving consultants to test the new app and see whether Apple’s “Measure” app has a practical application for the pre-move survey process.

Written by Wesley Davies and Paul Crothers of Gerson Relocation

Apple’s new Measure App could be one of their best features yet, but has it been created as a novelty or are Apple’s intentions to replace the good old tape measure, and how could this benefit the removals industry? Wesley and Paul put it through its paces.

The first step was to download the IOS 12.0 update which took less than 10 minutes all in all. Paul noted that as an Android and Apple user, he felt that Apple’s updates are typically easy to do.

First impressions of the app are good with Wesley commenting that it was straight forward and easy to use. The guys started measuring a few items that would be typically included in a move such as desks, chairs and cabinets before moving on to room sizes. We found during this test that the Measure App is officially great fun. In typical Apple style it worked relatively seamlessly and intuitively.

Wesley noted that as part of either a video survey, or in-the-home survey, they are measuring for volume. “Apple’s Measure works like a tape measure where you tap and draw a line around the item using your camera, to get the volume you need to measure each side and you still need to calculate the volume. My hope was that you could point the phone and it would automatically calculate the volume, but this is more like our current process of measuring items, although it uses the camera – which is more fun.”

One of the key skills of surveyors is that they are continually calculating volumes, they are able to easily identify the volume of an item often just by sight. Both surveyors said that they felt that the app was great, however they did feel it could slow down the overall survey.

How accurate is it?

Would you recommend it for a pre-move survey?

When asked, both said how impressed they were by the app and its features but they felt it fell short for use as part of a pre-move survey.

Wesley commented “As a move surveyor I was very interested when I saw the update. Every day, I conduct surveys of homes of people who want to move either in person in the home or via our video survey option. During the survey I calculate the size and volume of items to be moved. I have to be accurate to be able to provide a quotation that does not overestimate the volume or underestimate which would create additional costs later on. I like the app but I feel it is not something we could use just yet. We are using video surveys which we find work particularly well, I feel that there is a great opportunity to integrate this functionality.”

Paul added “When I heard about the app, I imagined all the possibilities. I think it delivers on some, but I really hoped that it would have the volume calculation function. Then again, they weren’t designing this for pre-move surveys. Whilst I wouldn’t recommend it for the survey at this stage, it is close enough if you want to measure a wall to see if your new sofa will fit. If you are looking for a more defined and accurate measurement then close the app, put your phone back in your pocket and bring out the tape measure.” 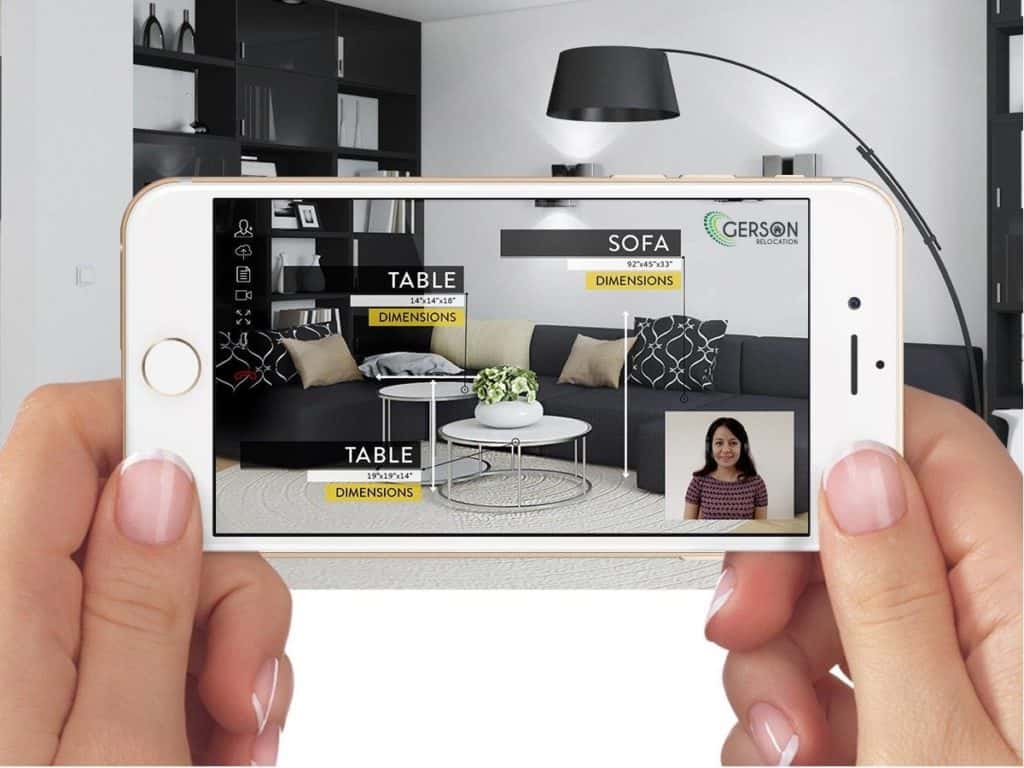 How would this app help improve video surveys?

For many household moves, video surveys are an ideal solution for conducting a survey of your contents to be packed and moved. Many customers feel that it is convenient and easy to use. For those of you who are not familiar with video surveys, they work in a similar way to having a video call on your phone, with the home owner able to use their mobile device to show the items to a professional surveyor and the surveyor to provide a calculation of the items to be moved and an accurate quotation for the cost of moving.

If Apple’s Measure App was incorporated into the video survey platform then this would definitely benefit the process. So what next?

If enough people were to download this app then we hope that Apple will provide more updates which will improve the Measure Apps performance and accuracy.

This will mean that we as surveyors can provide crates for the items which will need accurate measurements. This will assist the customer to measure items without putting their phone down and will be easier and safer to measure high paintings or ornaments on top of wardrobes/cabinets etc.

We can also measure large furniture and doorways to see if they fit through, and we could do this from our desks in the office to anyone and anywhere on the planet.

All of this information will give the surveyors and coordinators exactly what they need immediately to quote the job within the 24hr period.

Wesley and Paul felt that the Measure App is great fun and useful for people who are using it as a general guideline or planning the layout of a room, but it is not quite ready to be used in the removals industry just yet. We would love to see a volume option and how the app is developed as this would be a great addition to the video survey platform.

An Expert Guide to Goods In Transit Insurance for Removals

Protecting your belongings during a house move, particularly when your new house is overseas, isn’t…

Is It Illegal to Work on Weekends in France? A Guide to the French Working Hours

Any change in location will impact all areas of your life, including work. If you’re…